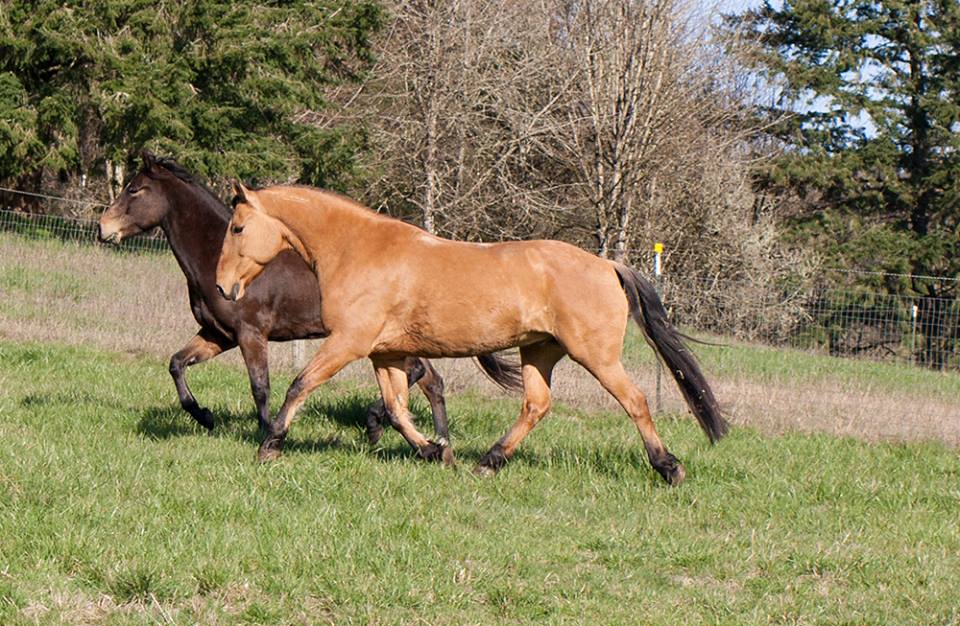 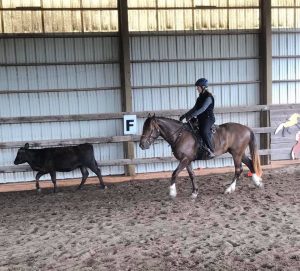 In a horse herd there is a distinct pecking order among the horse members that is generally maintained within a stable herd. The influx of a new horse or a young horse who gets older and attempts to rise in the status hierarchy causes a short period of imbalance until the pecking order is reestablished.  In a domesticated herd, this pecking order becomes stable over time if the herd dynamics don’t change (i.e. no new horses brought in, no foals born, no young horses growing up and males are gelded). This stability is maintained through a series of subtle and not-so-subtle body cues and body language, attitude, confidence and aggression but for the most part, once the hierarchy is established the horses are content to keep it at the status quo.

A horse is most content and comfortable when he knows his position within the herd – there are no surprises, he knows who leads and who follows and if it’s not unjustly cruel (which horses never are, but people sometimes can be…) he accepts his role in the pecking order.

Anytime you interact with your horse you are in essence becoming a herd comprised of two. And the difficultly most people have within their herd is an ambiguous, wishy-washy role. We want to be our horse’s friend, we treat him like a baby or a buddy, and we think it’s cute and affectionate when he pushes up against us for attention. He roots around in our pocket for the treats he knows we have and starts to push us with his nose or gets so close he’s stepping on our feet or driving us back against a wall. Pretty soon he’s pinning his ears at us when we’re near his feed or worse, making rushes at us to drive us away from his feed. He becomes difficult to catch, walks all over us when we’re leading him and soon starts to become aggressive towards us until the situation becomes dangerous and we consider having a goldfish instead of a horse.

There are many reasons this progresses to this point – and often it’s been in the making for some time. By neglecting a whole slew of seemingly minor interactions with our horse, where we could be asserting our leader role in small and subtle ways, we have allowed our horse to question whether we really are leader material, and have shown him, often without even being aware of it ourselves, that we’re not really sure we’re capable. This is worrisome to the horse because in his world, someone has to be the leader. He figures since you seem to be a bit wishy-washy about it, he might be better suited for the role.  And once he decides he’s the leader of the herd, it’ll take some serious effort on your part to “take” that back. Usually that’s a time when you call on a trainer to help reeducate your horse …and YOU!

As I mentioned above, there are many small ways to fortify your role as leader in the herd. These “ways” are small in the beginning, but meaningful. It requires awareness, knowledge of how horses communicate, consistency and above all else, speed– quickly implemented, fast to move “on”. One example is ground space. Every time you take a step back, off the ground you were standing on, because your horse moved into your space, you’ve given your horse leadership role. Ground space is of vital importance to a horse – he who owns more ground space gets more food! By allowing your horse to move you off the little plot of land you stand on, you’re in essence saying he is dominant. It doesn’t seem like much to us – a person steps too close to us, we step back. The only signal it may give off is one of dislike and then all we may have to deal with is a little resentment or hurt feelings. Not with a horse.  The signal you give off is “I’m a follower – you can push me around” and then what we deal with is a horse who becomes a leader in our herd of two – and I don’t know about you, but I don’t particularly want to be taught my position with hooves and teeth!

Our best defense against this subtle interplay of ground space dynamics is our voice and our arms.  When a horse steps into your personal space, or tries to get on your ground, raise your voice suddenly and swoosh your arms up at him quickly. He’ll jump back. End it quickly and go on like nothing happened – don’t make a big deal about it. Now, the horse tries again….do it again! Then go back to your business (presumably you were probably standing around talking to someone….). After a few repetitions of this, you have become the leader because you won’t give up your ground to him.  You’ve also interacted with him like another horse would – quick to react, quick to forget. Horses don’t understand lasting anger or resentment and become confused and frightened when we become angry at their antics and have extensive, long-lasting reprimands.  What we become is that “unusually cruel” kind of leader, only because our method of communication is in human-speak (which we understand from each other) and not horse-speak. A horse handled in this way becomes a frightened and nervous horse over time and the bond of trust between the herd members (you and him) is never allowed to flourish.

This ground space concept also applies when you’re making the horse move around you.  A good exercise is having the horse move around you in a tight circle then switch directions (while practicing that nice disengagement of the back hip). Make your horse move “around” you – don’t move out of his way or let him try to move through you. Use your voice and your waving arms to push him away. Horses are masters at using their shoulders to force their way into a space. I usually will carry a crop or the end of the lead rope in my free hand and if the horse tries to bully me with his shoulder I’ll generally rap across it once if it gets into my space.  Speed is good here – one good rap (no little annoying tap-tap) is usually all it takes to master your ground space! Another example is feed. When you go to dump feed in your horse’s bucket or lay out a flake of hay don’t instantly turn around and walk off as the horse approaches his food. We do this without thinking as we’re moving about doing our horse chores. Doesn’t really mean anything to us but to the horse, he just thinks he’s driven you away from the food – ergo, he’s the leader. Next time you feed him stand there until he has come over and started eating. Then pet him. If he comes up to you with ears pinned then raise your voice and swoosh your arms to drive him off. Don’t let him come to the food until he can do it nicely and non-threateningly. When he comes to you nicely, pet him and stand there for a few minutes touching him. If at any time he gets food aggressive, drive him off again. Repeat until he stands there eating while you can touch him all over and he doesn’t seem bothered. Once this is established, you’ll only need to enforce it occasionally and eventually it just becomes an accepted thing and your horse will approach you and his food pleasantly because he has respect for you as the leader.

There are many other means of establishing your leadership role. Much too long to list them all here but if you have a horse you’re struggling with – one who seems to be bossing you around – then it’s time to get some professional help to learn how to be a herd leader.